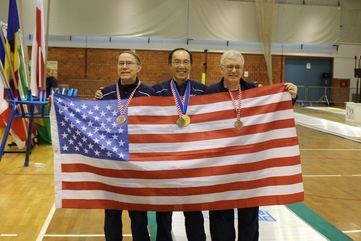 Yung won a quick second bout, 10-3, against Volkhard Herbst (GER) to advance to the quarter-finals where he defeated teammate Philip Sbarbaro (Vienna, Va.), 10-6.
Sbarbaro finished eighth – his second top eight finish at this event after placing sixth in 2008.
On the other side of the table, a second quarter-final took place between David Seuss (Charlestown, Mass.) and Ray Sexton III (Round Rock, Texas) who earned his eighth Vet Worlds medal on Thursday when he won bronze in the foil event. Seuss won the bout, 10-5, but lost his next bout to former Olympian Richard Cohen (GBR), 10-5.
Seuss earned bronze at his first Veteran World Championships and Sexton finished sixth as one of four U.S. athletes who all qualified for the quarter-finals.

In the gold medal bout, Yung built a 9-3 lead against Cohen, but the three-time Veteran World Champion came back to score four straight touches to bring the score to 9-7.
“I intentionally eased up so that he, tactically, did something that gave him positive reinforcement. I gave him touches and then I never did it again,” Yung explained. “You feed the tiger a piece of meat and he’s going to look for the meat and then I don’t do it again. Luckily, I had the cushion to take some chances. Richard Cohen is a tremendous competitor so if you did something terribly simple, he’d just eat me alive.”
After the bout, Yung had plenty of praise for his opponent.

“Richard Cohen’s a great champion. He knocked me off at the Vet Worlds in Martinique and went on to the gold medal bout that year,” Yung said. “He’s a three-time World Champion, eight-time European Champion so it was a satisfying bout to win.”
Yung said he felt like he had always had the talent to win gold, but had lacked the ability to put the necessary pieces together at the right time.
“The element I think I was missing in the past was grit and determination. This time I was more determined to win. People were always telling me I had the tools and that I just had to have more determination. So I was a little more focused. I outstrategized, too, but it was a lot about intensity,” Yung said. “Even if you have good strategy, if you can’t pull it off because you’re not psychologically ready or emotionally tenacious enough, you can’t do it and then it sort of spirals down. As a fencing coach, that’s one of the things I focus on. Two of my students, Ellen O’Leary and Jane Eyre, also medaled here and now it’s time to show that I can do it too, rather than just coach.”
Contact: 425-761-1673             mailto:wyung888@gmail.com